In this article, I will walk through and try to explain a 2009 paper RNA-Seq gene expression estimation with read mapping uncertainty by Bo Li, Victor Ruotti, Ron M. Stewart, James A. Thomson, and Colin N. Dewey.

I will also occasionally refer to a 2011 paper by Bo Li and Colin N. Dewey, RSEM: accurate transcript quantification from RNA-Seq data with or without a reference genome.

Together, the two papers explain the theory behind the software package for estimating gene and isoform expression levels RSEM.

Typically (but not always), the RNA is reverse-transcribed to DNA either before or after fragmentation, and it is the DNA that gets sequenced, but that’s irrelevant for us here.

The goal of the RNA-Seq data analysis is, given the reads and a list of known gene isoforms (all possible RNA sequences), estimate the relative number of RNA molecules (transcripts) of each isoform in the original biological sample.

So, for instance, given two isoforms

A simple estimation method is to count the reads that align to each isoform and then adjust the counts for the number of reads and isoform sizes.

However, not all reads align to a single isoform. Isoforms of the same gene are highly similar: they all are built from the same small set of segments (exons). Different genes may also be highly similar. More than a half of the reads in any given experiment may map to more than one isoform. Such reads are called multireads.

We could just ignore multireads and consider only the reads that unambiguously map to one isoform. One problem with this is discarding a lot of useful data. But more importantly, without a careful adjustment, discarding multireads introduces a bias: we will underestimate the abundance of genes that have many active isoforms or other similar genes, as these genes are more likely to produce multireads.

The paper describes a probabilistic model and a computational method to estimate isoform abundances based on all available reads, including multireads.

As in the original paper, we will assume single-end reads and ignore quality scores. Besides, we will make two addional assumptions compared to the paper:

Thus, we have five vector-valued random variables (of different dimensions!): \(\theta, \tau, G, S, R\). Of these, \(R\) is the observed data, and \(\theta\) and \(\tau\) are the unknown parameters that we wish to estimate from the data. \(G\) and \(S\) are unobserved variables that we are not directly interested in, but they are necessary to build the model.

Vectors \(\tau\) and \(\theta\) are equivalent in the sense that they carry the same information, just on different scales. Once we estimate \(\theta\), we can get an equivalent estimate of \(\tau\), and vice versa, using the conversion formulae given above.

We call \(\theta\) a random variable in the Bayesian sense. It is random because its value is not known and some values of \(\theta\) are more consistent with the data than the others. There is no particular random process that generates \(\theta\), so it is not random in the classical (frequentist) sense.

What does an estimate of \(\theta\) (or \(\tau\), which is usually more interesting) look like? The most general form is the full posterior probability distribution \(p(\tau|R)\). In practice, we need to summarize the distribution to make sense of it. Some useful summaries are:

We begin by formulating a generative model, a probabilistic process that conceptually generates our data.

Note that this model does not accurately represent the physics of an RNA-Seq experiment. In particular, it does not model fragmentation. Essentially, the model assumes that the fragment size is constant and equal to the read length. This is addressed in the 2011 paper, although the model there is still backwards: they first pick an isoform and then a fragment from it, whereas in reality we pick a fragment at random from a common pool, and that determines the isoform. This is the reason why \(\theta\) does not represent the isoform frequencies and has to be further normalized by the isoform lengths to obtain \(\tau\).

A generative model does not have to match exactly the true data generation process as long as the joint distribution \(p(G,S,R|\theta)\) fits the reality. Here, the authors saw a way to simplify a model without sacrificing its adequacy much.

There is a subtle issue with this. Recall that the isoform expression levels are represented by the vector \(\tau\), not \(\theta\). The vector \(\theta\) is “inflated” by the isoform lengths to account for the effect that longer isoforms produce more reads.

Therefore, the prior \(p(\theta)\propto 1\) corresponds to the (unfounded) assumption that shorter isoforms are somehow a priori more expressed than longer ones.

How much do the different priors affect the results? It is not clear. Li et al. use the uniform prior on \(\theta\) implicitly in the 2009 paper by computing the maximum likelihood estimate and explicitly in the 2011 paper, when computing credible intervals. In the latter paper, they note:

I haven’t tested yet whether the uniform \(\tau\) prior improves these CIs.

The EM (“expectation-maximization”) algorithm is used to find the maximum a posteriori estimate of \(\theta\). As Li et al. point out, the EM algorithm can be viewed as repeated “rescuing” of multireads. Let’s see what that means.

In this section, we will assume that a read either maps to an isoform perfectly or does not map to it at all, and that it can map to each isoform only once (though it can map to several isoforms at the same time). This is just to simplify the presentation. The algorithm and its derivation, which are presented in the next section, can handle the general case.

The easiest way to estimate \(\theta\) is by considering only unambiguously mapped reads. This leads to the “zeroth” approximations

Consider a particular multiread \(n\). Can we guess to which isoform it belongs? No, it maps equally well to both. But can we guess how many of the multireads come from each isoform? The more expressed an isoform is, the more reads we expect it to contribute to \(N_{12}\). How do we know how much each isoform is expressed? We don’t — if we knew, we wouldn’t need the algorithm — but we can make a reasonable guess based on the estimate \(\theta^{(0)}\).

We need to be careful, though. Would it be valid to estimate the fraction of ambiguous reads that come from isoform 1 as \(\theta^{(0)}_1\)?

No — because, according to our assumptions made earlier in this section, \(R_n\) maps to either isoform only once. The number of all fragments produced by isoform \(i\) is proportional to \(\theta_i\); but the number of fragments capable of producing a particular read, \(R_n\), is proportional to the transcript abundance, \(\tau_i\). The longer an isoform, the more fragments it will produce, but also the lower fraction of these fragments will look anything like \(R_n\).

For a higher number of isoforms, the computations are analogous. To see how this works out in practice, consider the following simulated example with 3 isoforms. You can download the R script performing the simulation.

The counts obtained from a thousand RNA-Seq reads are:

Amazingly, under the assumptions introduced in this section, we don’t need to know the actual reads and how they map to the isoforms — we only need the six numbers above.

The first five successive approximations for \(\theta\) made by the EM algorithm are:

The zeroth approximation, \(\theta^{(0)}\), is not very accurate, but then it quickly gets much better: 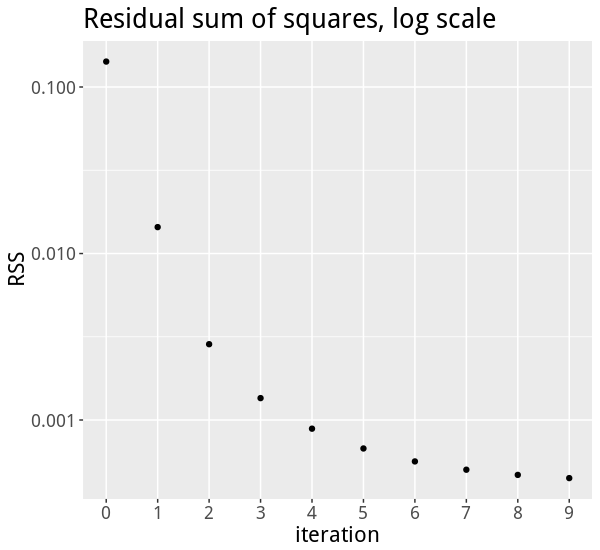 We start with the following algebraic identity:

Applying this operator to both sides of \(\ref{EM1}\) gives:

It is important to realize that we are not approximating anything yet or introducing any new assumptions (e.g. that \(G\) and \(S\) follow a certain distribution). Everything up to this point is algebraic identities.

Thus, we only need to increase — ideally, maximize — the other term in \(\ref{EM2}\), \(E^*(\log p(\theta,G,S|R))\). This is called the expected complete-data log-likelihood. Now it’s time to exploit the Bayesian network of our generative model:

where the coefficients \(a_i\) can be computed by applying Bayes’ theorem and \(\ref{JOINT}\):

The method of Lagrange multipliers gives the following necessary condition for the extremum of \(f(\theta)\):

Consider the probabilities \(p(R_n|G_n=i,S_n=j)\) that are used to compute \(a_i\). The probability that \(R_n\) could have originated from isoform \(i\) at position \(j\) exponentially decreases with every mismatch between the sequences of the read and the isoform.

The only concern here is to keep the denominator from getting close to \(0\). In our case, the denominator is always greater than the numerator, so the only thing we need to worry about is if all the terms get approximated by \(0\), that is, the read does not map to anything. This is one of the reasons why Li et al. introduce the noise isoform, which never gets replaced by \(0\). An alternative is simply to ignore the reads that do not map anywhere.

A revisit of RSEM generative model and its EM algorithm for quantifying transcript abundances.